I thought I'd look further at the issue of effective communication of research impact and expertise. The University of Southampton Communications team made a press release on the subject of "Brain-Computer Interfacing" earlier this term. It's obviously because they believe that we as an institution are good at it and that we have something to promote. 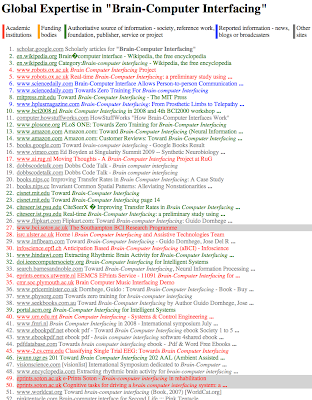 I thought I'd take a look at how effective our communication on the subject is, and as you can probably guess, this equates to how high up the Google ranking do we feature compared to other universities? This is a pretty good measure of the effectiveness of our research expertise promotion because anyone who wants to find an expert on a topic is going to start by looking on Google. I knocked together some scripts to look at how our institution fares in the competition for Google eyeballs (basic web analytics).
The screendump on the left shows the results of a Google query for "Brain-Computing Interfacing". All the results from universities are coloured in red, all those from publishers in green, those from news sources, magazines and blogs in blue and unclassified resources are grey. You can quickly see that there are a couple of university-contributed results right at the top, and then an increasing number further down. Those results with a silver background are from Southampton (yay!)
Clearly, Google looks for resources which are about "Brain-Computer Interfacing" and then ranks them according to their "impact" or "importance". Exactly how it does that (PageRank or Black Magic) isn't really my concern here; however it happens, Google controls the order in which these results are presented, and the effect is that if you appear near the top you are more likely to get visited. The script that I use to generate these annotated pages actually gets 500 results, but most people get 10 results per page and don't bother to ask for more than a single page. 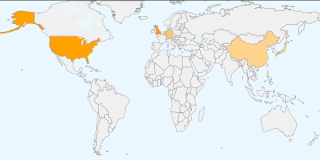 To better compare institutions' effectiveness at promoting their research expertise, I distilled this page to a spreadsheet. Once it's in a data form, then the sky's the limit and I can visualise it in different ways (such as this map of global expertise in the area).
The spreadsheet (reproduced below as a table of institutions) shows me that Southampton comes out rather well in the area - we are the third institution named after Oxford and Gronigen, and that slightly further down the list comes a couple of papers from our Institutional Repository. This seems to be a good result - we can claim to be doing alright on this topic. But what about all the other areas in which we think we have some expertise? There are hundreds and thousands of keywords that we need to analyse to see the effectiveness of our communications overall. I think its time to scale up my scripts to get a bigger picture!
PS It did occur to me after I had published an earlier draft of this post that I should also have checked the results for "Brain-Computer Interface". It turns out we come further down the league-table for this variation on the phrase (7th institutional position rather than 3rd) but that this phrase is much less-commonly used. As long as potential funders, students and media researchers know which phrase to use we should be alright. Otherwise, we will have to become a bit more canny about our use of synonyms. (I'm not sure whether it's significant that an EBay sponsored link appears only on "Brain-Computer Interface"!)
Posted by Leslie Carr at 16:59