Recently I sat in on a demonstration of Twitter to a University research group that included our PVC for research. Because of his presence I was quite self-conscious about justifying the Web tools I normally take for granted, and although the demo itself was fine, it didn't seem to answer the question "is this really useful or just some gratuitous teenager technology?" I have always claimed that twitter is a fantastic tool for keeping up-to-date with the spread of ideas and debate in the community - lots of micro-comments keep me in the loop about which speakers have raised what issues at which conferences, even when I can't travel and engage directly. However, I have been worried recently that the twitter output that I see has been less technical/academic/professional and more personal/informal/gossipy. So I thought I would do a quick investigation to see if there is any evidence to support my positive experience of twitter. I chose to look at Twitter activity surrounding CETIS 2009 as several of my Twitter contacts had mentioned it in the run-up to the conference.
The CETIS conference (http://wiki.cetis.ac.uk/Conference_2009_Programme) is run by the JISC Centre For Educational Technology and Interoperability Standards, and attracts many people from the E-learning community. It took place at Aston on 10th and 11th November 2009, attracting 146 delegates according to the open list on the conference website.
Over the period that the conference had been mentioned (from the afternoon of Nov 5th up till midnight on Nov 12th) 566 tweets were sent by 89 separate contributors. The large majority of these (440, 78%) were sent during the conference sessions, with 255 (45%) on the first day and 185 (33%) on the second day. Outside the conference hours, 32 (5%) were sent in the break between the two days of the conference, 57 (10%) were sent before the start of the conference and 37 (7%) were sent after the end of the last session. 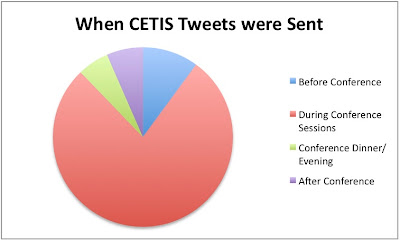 How many of these tweets are merely "backchat" or "electronic gossip" and how many of them are broadcasting helpful information? I used the twitter API to download all the tweets and individually categorised them as "informational" or not. An informational tweet contains some information about the conference that is useful to an external viewer (a non-delegate such as myself). It may contain a quote from a speaker, a URL to a relevant resource, or a brief (microsummary) of an issue raised. By contrast, an example of a non-informational tweet may be a complaint about the wireless network, a comment about the quality of the food or a message of thanks to the organisers. This categorisation requires some judgement on my behalf, but the criteria are resonably straightforward and repeatable.
The distribution of tweets over time can be seen in the following figure (click to see a bigger version), which also shows how the number of "informational" tweets (red) compares to the total number of tweets (blue). In total, 324 tweets (57%) were in the informational category.

During the conference sessions, the informational tweets account for most of the Twitter activity (307, 70%). In other words, the effort expended in twittering during conference sessions is not wasteful and distracting effort from engaging with the conference agenda. It is mainly valuable to an outside observer - which I would claim extends the impact and influence of the conference beyond the cohort of local delegates. Of course, this works best if the tweets can refer (and link) to a rich set of online resources to direct observers to. 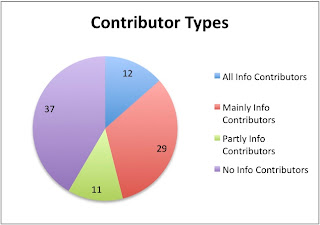 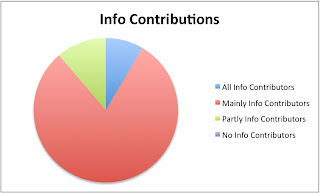 But those who stick strictly to the facts don't provide the biggest chunk of information. This figure on the left shows the contribution of the various groups of twitterers to the total information content of the tweets: most of the useful twitter information is provided by people who mix "information" and "comment".
So perhaps I shouldn't get too worried by the criticism that Twitter is full of people telling us what they have for breakfast and what happened on their trip to work. Perhaps it is precisely those kinds of people who are more likely to let us all know what the key themes are emerging from that high profile conference that we couldn't attend.
Posted by Leslie Carr at 16:14