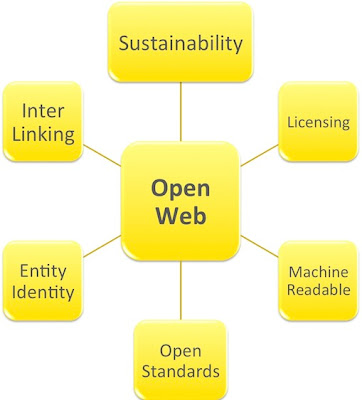 In my previous posting I proposed the idea of the 5 stars of open access. There is of course one feature that the original "taxonomy" misses out completely - repositories! Not just "my favourite repository platform", but the idea of persistent, curated storage. Consequently, my proposal for open access doesn't mention repositories - a bit of an oversight!
At the moment, the entry level to the 5 stars is simply "put it on the web, with an open license". Perhaps we should change this to "put it in a repository with an open license"; perhaps we could designate a "zeroth star" for "just put it on the Web". However, the Linked Data Research Lab at DERI already propose a no-star level, which involves material being put on the web without an explicit license.
You can get away with putting material on the Web without any concern about their future safety - but not for long, especially if you want to build services on top of that material.

Services like CKAN (Comprehensive Knowledge Archive Network, http://ckan.net/) are registries of open knowledge packages currently favoured by the open data community. This registry is built on a simple content management environment, and by November 2010 was already returning HTTP 400- and 500-class error codes for 9% of its listed data source URLs.
A more extreme example is seen in the UK, where police forces recently started to release data about crime reports. But "whenever a new set of data is uploaded, the previous set will be removed from public view, making comparisons impossible unless outside developers actively store it" (see The Guardian for more details).
Repositories have an opportunity to provide management, persistence and curation services to the open data community and its international collections of linked data. Whether our OA platforms are chosen (DSpace? EPrints? Fedora? Zentity?) is not the issue - it is the philosophy and practices of repository that are vital to the Open Data community, because the data is important and long-lived.
On the other hand, I have argued that reuse (and in this case retention) are the enemy of access. "Just putting it up on the Web" is an easier injunction than "deposit it in a repository" (especially if you haven't got a repository installed) and hence more likely to succeed. So we shouldn't put repositories on the Linked Data on-ramp (step/star 1), but if not there, then where should they go?
I would argue that by step 3 (using open formats) or 4 (adding value with identifiers and semantic web tech) the data provider is being asked to make a more substantial investment, and to boost the value of their data holdings. This seems to be an appropriate point to add in extra features, especially when they will help secure the results of that investment. So the 5 stars of Linked Data would mention repositories in Level 4, but the five stars of Open Access could do so in Level 1 because they are already an accepted part of OA processes.
I'm not sure I'm comfortable with mixing the levels - it makes for confusion. Wouldn't it be much better to have one set of processes that apply to all forms of openness - the basic principles of the Web? In my previous post I pointed out that you can add 5* links to 2* PDFs and spreadsheets, so I think possibly that the solution lies in the fact that the 5 stars are not sequential stages, but 5 more-or-less independent principles that each make openness more valuable and useful: licensing, machine readability, open standards, entity identification, interlinking. To which we could add "sustainability", making (see diagram above) is a constellation of linked data properties.
Posted by Leslie Carr at 08:12