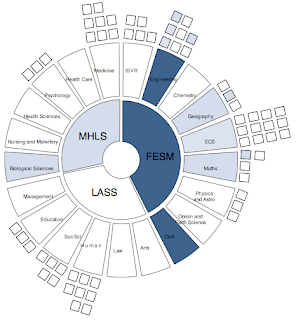 I've been working on the problem of showing the spread of research on a particular topic across the institution. The aim is to enable the repository to show the contribution of the various schools, groups and individuals in areas of strategic interest, and to allow the repository to play an active part in research management.
There many standard techniques for plotting the magnitude of the contributions of individual authors, the relationships between co-authors (social network) and the patterns of co-operation between departments. Many of these visualisations are in the form of networks of nodes and arcs, produced by sophisticated layout algorithms which are difficult to control and difficult to interpret.
What I need to show my managers is a simple diagram that allows them to see the familiar structure of the university together with the dynamic and changing nature of the contributions in question. The image on the right shows an example of one such diagram that I am trying out. It shows the different layers of the university (the mega faculties in the centre, the 21 schools in the middle layer, and the various research groups as small stamps in the outmost layer). This diagram actually shows the relative research contribution of different schools and research groups to the topic "Renewable Energy", where dark colours mean more relevant outputs in the repository. (For the curious amongst you, "FESM" is the Faculty of Engineering, Science and Maths", so it is hardly surprising that it has the lion's share of contribution to the topic. But the value of the diagram is in its ability to show up activity where we hadn't expected it - in this case in the School of Biological Sciences.)
What surprised me was that I had to create this diagram by myself. There are no models, maps or diagrams of our institutional structure - even the so-called "org chart" is just a table in a Word document. Looking around other universities, I can't see any charts or diagrams that are meant to act as a model of the organisation. I can't believe that they don't exist. Can anyone point me to some?
(Technical background: I created the basic diagram in Excel using an "Exploded Doughnut" chart. I then saved that to PDF, imported the PDF into Illustrator and exported that into SVG, where I added some JavaScript to allow the diagram to shade itself according to the list of schools and research groups passed in as a CGI parameter. A repository export plugin passes the organisational affiliation data from a set of eprints to the SVG diagram.)
Posted by Leslie Carr at 15:00